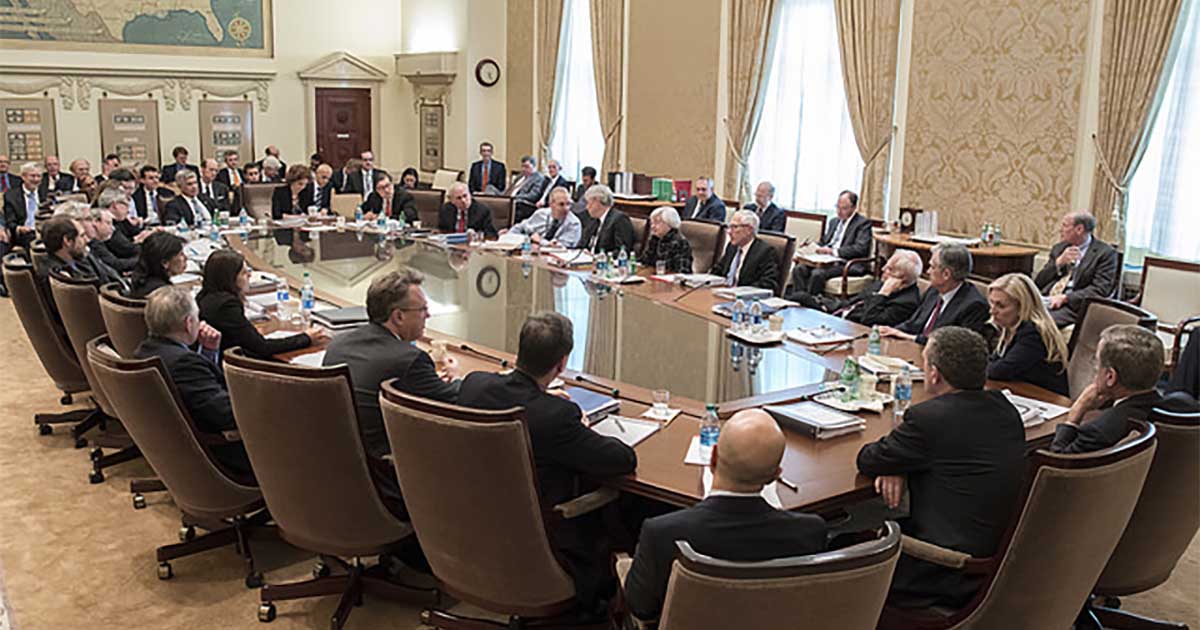 PHOTO CREDIT: US Federal Reserve Board of Governors, federalreserve.gov

CBDC—central bank digital currency—is coming our way. As it does, several heavy hitting financial players are warming up to take a swing at shaping it, as they aggressively lobby for regulatory oversight. What it means to crypto and your investment in decentralized currency.

One of the key facets of cryptocurrency—its decentralization—is a tantalizing premise upon which the majority of crypto is based. Removing central authorities such as banks and government from the peoples’ assets and maintaining Data Supremacy is a big deal for any investors working to protect their financials.

Big Banking—that behemoth of crooked dealmakers—is always looking for an angle. And in crypto, it’s pushing for one. Lobbyists are frantically rallying for government regulatory control over crypto of all kinds. Big Banking, after all, is Big Brother’s best friend: it sees the people profiting without them, and wants to be sure to have a seat at the regulatory table. Here at CloudCoin, we’re well aware that those authorities are working to edge their way into the crypto market, and that—with them—they intend to bring regulatory controls favorable to their agendas.

But as Big Tech giants push us to do business inside the fast-approaching Metaverse, it’s important to recognize that, however dedicated we may be to the concept of a decentralized currency, regulation is coming. The US, China, and the EU are all on board for the creation of these CBDC’s, and traditional banks are working to accommodate it and profit from the exchange. Their influence on the policy thus affecting cryptos is surely a thing to watch.

We recognize that cryptocurrency such as CloudCoin has gotten the attention of big financial forces. Heavy hitters like Visa, Mastercard, Paypal and others have already begun facilitating crypto, and central banks are working at a frantic pace to issue their own versions of it; complete with fees and commissions, of course. So as governments weigh the complexity and the interjurisdictional implications of regulatory propositions, it may be important to know that a number of crypto companies are lobbying, too. But why? What will that regulation look like, exactly? How will it affect what you’ve already invested?

A number of economists, lawmakers, and financial companies are asking the same questions. And the fact is… nobody is really sure.  But the idea that banking and financial institutions are lobbying so aggressively is telling.

Mondato, a consulting firm specializing in fintech & digital finance, recently published its view on the subject. The firm points out that “China, the U.S., the EU and elsewhere are on the precipice of releasing their central banks’ own digital currencies, which may serve as competitors to cryptocurrencies that regulators seek to favor over decentralized cryptocurrencies beyond their control. Lobbying from traditional banks and financial institutions, fearful of crypto’s instability and potential to render many of their services obsolete, may also dictate regulatory regimes towards hostile ends.”

For Mondato, of course, this is no small statement. While it certainly reflects the concerns of many, the truth is that crypto creators, themselves, are working to make the industry more reliable and relatable in the eyes of a public that has been slow to warm to them. Overcoming that perception of “instability” has always been a challenge when limiting a central authority. But more traditional, mainstream investors may see crypto more favorably if at least some stop-gaps are in place… hence crypto’s own involvement in the process. A number of them are already spending millions in lobbying, and lawmakers are bombarded with active and well-funded interests on all sides.

Citing Nicola Borri, Assistant Professor of Economics of LUISS Guido Carli University, Mondato backs up its assertion that while regulation is inevitable and has its downsides, the conversations currently taking place about its necessity are generally healthy. “Cryptocurrencies were born from people that have in mind a world with little regulations” writes Borri. “But at the same time, what we know from a lot of research, history, is that markets that are not well-regulated don’t work well… I expect the regulations of these crypto exchanges will be much more similar to the regulation that we currently see for intermediaries, especially for information disclosure and capital requirements. It will make it a little more expensive, but it will make it also much safer for investors, and ultimately it will lead to this asset class becoming much more mainstream.”

From a much broader perspective, the discourse revolving around sweeping regulations for cryptocurrency have all the familiar buzzwords that are at times dizzying, frustratingly overgeneralized, and often misleading. The idea of “ regulatory ambiguity”—the confusion over how conflicting or conflated laws and rules might be applied, thus creating confusion in the market-- is perhaps over emphasized. With crypto that operates off the blockchain, using RAIDA technology, CloudCoin is a truly decentralized, safe, and convenient form of crypto with transactions that happen in milliseconds—not days, or weeks. We believe the value of your investments deserve the best of all possible regulatory outcomes, and we will continue to monitor and report on regulatory changes that might affect the industry as a whole.